The gift of desperation 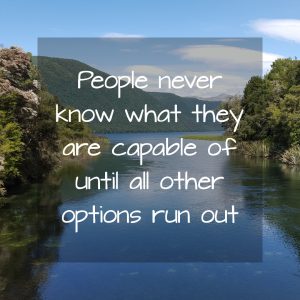 I carried on drinking excessively far, far longer than is rational. Normal drinkers around me looked on in despair; they couldn’t figure me out at all… and they couldn’t be expected to; their minds work completely differently to mine with respect to alcohol.

The things that hold us in denial are; highly strengthened cravings, the absence of drink-aversion triggers, the changes in mood and distress that are the result of alcohol tolerance, falsely distorted memory favouring alcohol, and the firm knowledge that drinking will make us feel better. Added to this is the change in our social patterns; we only willingly attend social functions where there will be alcohol, so the only “fun” we know in our lives is linked to drinking.

People observing or trying to help us are completely baffled by our behaviour. “Why don’t they see all the harm that their drinking is doing?” They think we are being weak, stubborn or wilfully ignorant. They see all the problems that our drinking is causing; to ourselves, to our families, at work, or with the law, and the solution is obvious to them… drink less! But we can’t.

Drinking less is not an option for us because it cannot be done. The combination of; a reward system in a runaway condition, changes in the brain due to alcohol tolerance, and the absolute knowledge that “drinking is good” make it impossible for us to either drink less, or to exercise effective control over our drinking. This is an absolute truth. Not only is our free will compromised, but our mind actively works against us, sabotaging any attempt to reduce what we drink or stop for a spell. Once our brains have adapted to tolerate alcohol then we already lack the means to control how we drink: no-one has ever managed to overcome this.

Drinking moderately was not an option for me, but I clung on desperately to the idea that I could somehow achieve it. Drinking was the only thing that made living worthwhile and I couldn’t imagine life without it. So I kept on trying to control my drinking … and I kept failing to do so.

Denial eventually broke down for me in the face of indisputable evidence that my continued drinking was a bad idea. It wasn’t a lightbulb moment; it was more of a gradual grinding down until the conclusion became inevitable. It’s not what I wanted to believe, but in the end the conclusion was inescapable… my drinking had to change, because try as I might I could not manage one simple thing… to drink sensibly. I was all out of ideas. I’d tried everything but I still drank more and I drank more often than I wanted to, and far, far more than was sensible even by my own “heavy drinker” standards. But I was left in complete limbo. I couldn’t control my drinking, but the idea that I should stop forever was inconceivable… I couldn’t even go three days, so how would I stop forever, and why would I even want to try?… not drinking meant no more fun!

“Why would I?” eventfully answered itself. There came a time when I couldn’t stop drinking, but I couldn’t carry on either; things were really bad and continued drinking meant things were going to continue to get worse and worse. As I looked into my own future I only saw hopelessness and despair. As far as I could see I was going to end up dying somewhere alone and miserable. It had change. That was all: it had to change. I didn’t really even know what “it” was; everything in my life was going wrong, but drinking was definitely a significant part of it… and it had to change.

Denial was broken. It left me desperate and directionless, but that desperation was the key motivator that allowed me to change what had previously been unchangeable. Desperation gave me levels of courage, determination and strength that were previously unattainable. Desperation is what we get when we hit the “rock-bottom” that’s often mentioned in recovery circles, and the “gift of desperation” is often the boost that allows us to succeed when we have previously failed. Hitting rock-bottom isn’t essential to recovery, but it is very often what is required to give us sufficient strength to overcome those compelling mental processes that drive our addiction. Those mental processes evolved over hundreds of millions of years with the express purpose of directing our behaviour; that is why they exist. They evolved to make us behave in certain ways despite what we think is right in the moment, and they are deliberately not easily set-aside because their intent is to help us survive… which is the ultimate goal of life. Desperation gives us the strength to overcome the internal screaming demand that we drink and that we drink now.

I was desperate, but I was also clue-less. All I knew about my drinking was that I couldn’t stop it, and that is finally what drove me to find help. I began to acknowledge the awful idea that I might be an alcoholic, but I didn’t know what to do about it; I was completely out of ideas. Nothing I had tried had worked so I had to somehow find people who knew what to do. I walked into an AA meeting but in reality, at this point, almost any help would have worked. The essential element in recovery is not the recovery method followed, but the will to change. Once we have that will then any recovery method will help us, but until then nothing is sufficiently persuasive to overcome five hundred million years of evolution.