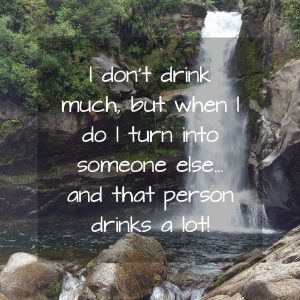 Alcohol (ethanol) is a simple little chemical. It has two carbon atoms, six hydrogen atoms, and an oxygen atom. It doesn’t travel at speeds exceeding the speed of light and it doesn’t have the gravitational pull of a black hole… in fact it is quite boring. Apart from being combustible and moderately useful as a solvent it is in fact quite unremarkable, except in its capacity to bugger up how brains work.

Being a very simple and therefore small molecule it slips straight through the blood/brain barrier and busies itself finding things to bind onto in our synapses… the tiny gaps that link brain cells to each other. There it blocks some sensors open, and it blocks some sensors closed; these are sensors that should be free to receive different chemicals, and THAT is the limit of what it does in our brains. The rest we do ourselves.

Here’s a little scenario I can put together in my mind:

I am sitting in a plain room and a plain table. I am not thirsty or hungry or in any way distressed; I am perfectly at ease. Imagine some scientists have me all wired up to gizmo’s that measure what’s happening in my brain and body and they’re running an experiment.

First they bring in a glass of orange juice and put it in front of me and go and check their dials…. nothing.

Next they bring in a glass of wine and put it in front of me, but now when they look at their dials and instruments they see that my brain is going off!

It would be very tempting to think that the alcohol has somehow had this effect on me, but this isn’t true at all… they could get the same result if they handed me a photograph of a glass of wine. There doesn’t even need to be alcohol physically present for this to happen. Alcohol hasn’t changed what my brain is doing; it’s done that all by itself.

Alcohol does not exert some magical power that makes me want to drink it… I manufacture that entirely myself, within my own brain. Alcohol does not create the craving to drink it, I do. I don’t mean to, it just happens, and I can’t choose for it NOT to happen. It happens whether I want it to or not. It is an entirely automatic function of my mind and totally beyond my control; I can’t turn it off, I can’t ignore it, and damn! it is insistent.

But here’s the odd thing. If the experiment was repeated with a person that wasn’t an alcoholic then the result wouldn’t be the same at all. Even though our brains are put together in the same way, and alcohol does precisely the same things in their heads as it does in mine, the result is different. In them the urge to drink is present, but it is not demanding and they can choose to ignore it if they want to, but for me the demand is so strong it’s like standing next to a fire alarm that’s going off… it can’t be ignored.