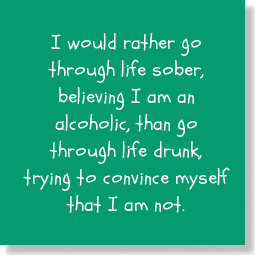 I don’t get rattled often these days, but here’s something that gets me frustrated. I often read in recovery blogs, notice-boards, chat-rooms and online communities … “I drank because…” and usually what follows this rattles me. It troubles me and I really want to just reach through the internet and give someone a gentle shake. “I drank because I was depressed”, “I drank because of my anxiety” and “I drank because of my loneliness” … these all get me concerned. Some people won’t like what I’m going to say next, but if you’re the sort of drinker that I was then the sentence “I drink because“ should probably only end one way.

I was never short of a reason to have a drink. It didn’t matter what time of day it was or where I was or what I was doing, sooner rather than later I’d get the voice in my head talking to me… and it would tell me one way or another that a drink would be a good idea. “You’ve just got time for…”, “You’ve done well you deserve a drink…”, “a drink will make you feel better…”, “just one!”. The voice was never far away. Even first thing in the morning when I still had last night’s hangover I’d be urged to have a drink… “it will make you feel better”, “it will steady your shakes” and the voice was always accompanied by that longing for a drink. I couldn’t distinguish which one came first because they arrived differently; one had feelings but no words, and the other had words but no feelings, but they always seemed to come as a pair.

It’s interesting how that works. My reward system fired up a craving (triggered by whatever… being conscious and sober was enough most of the time) and my mind would immediately justify the craving. It’s because brains like things to be orderly. When my mind launched the craving it needed to explain it to me because we don’t just do things all the time because we feel like it, we have to feel like it and it has to be reasonable… otherwise we’d all have jumped off a cliff to see what flying was like before the age of ten! So our brains do a quick “reasonable” test, and this is where the faulty wiring shows itself. Our brains check if this is a good idea, but our memories are not balanced in this regard. “Drinking is good” and “drinking is fun” have been so deeply learned that they are the most powerful memories we know. There are other memories too, like “drinking before I drive isn’t a smart move”, but these carry almost no weight. When our brains compare whether drinking is a good idea right now with whether it’s a bad idea then it’s making a comparison based on distorted memory. “drinking is good” always wins over “drinking is bad”… it’s a bit like a gorilla fighting a jellyfish.

The truth is that I could be triggered to drink at almost any time of the day and my mind would immediately run through its process. Craving –> Should I drink? –> Yes! and here’s why. This process was automatic and virtually instant. There was no gap in the process where I was offered a free choice. Free-will when it came to drinking barely existed at all… my decisions were all pre-made for me automatically and it took enormous effort to counter them.

So these days, if you ever hear me start a sentence with “I drank because…”, it will end with “… because I am an alcoholic”

It took me a while to properly grasp just how automatic and compelling my drinking had become, but these days if you ever hear me start a sentence with “I drank because…”, it will end with “… because I am an alcoholic”