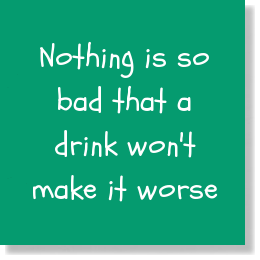 Relapse comes in many shapes and sizes. The first relapses we endured were failures to limit our drinking when we wanted to… e.g. “I’ll only have a couple”. It was when we realised that we couldn’t follow through on that commitment that the alarm bells first started ringing. Then there were the intentions to not drink at certain occasions or places, and again, the alarm was raised. In time we recognised that our drinking was out of control and we had to do something about it. This call to action was raised on the back of these earlier relapses; occasions when our intentions to abstain or limit the amount we drank were not achieved.

Recovery is built on the experience of relapse. It is these failures and near misses that allow us to progress into a life without alcohol; but only if we learn from them.

When we pick up a drink we do so to satisfy an automatically induced “wanting” or “longing” for alcohol. We experience this as a craving. It is the brain’s way of motivating us to do something that’s deemed to be beneficial in some way. But these cravings do not occur randomly, they are induced automatically when certain conditions are perceived. These conditions are known as triggers, and the simplest trigger for us is seeing alcohol close by; this automatically initiates a craving to drink. We alcoholics develop very many triggers that induce a craving to drink, and for those of us that drank heavily over a long period those cravings become enormously compelling.

Cravings to drink are not voluntary. We can’t turn them off because they are entirely automatic, and they are hard to ignore as they are instructions that work at an instinctive level… there is no conscious thought involved at all.

When we first try to limit our drinking we discover to our horror that we can’t. But as our decline into the depression of addiction deepens we realise that we must. It is a fight between a seemingly immovable object and an irresistible force; on one hand we can’t stop drinking, yet on the other, we must. If we are to live worthwhile lives then we must somehow manage to stop drinking, and that means overcoming the huge cravings induced by our triggers. This is enormously difficult.

Every time we drink in response to a craving then the power of the trigger is increased; the trigger successfully returned the desired result, so the brain makes it more important by increasing the power of the craving it induces. We alcoholics have very many of these triggers, and we have satisfied them so many times that the cravings they induce are enormously powerful. But in exactly the same way as a trigger is strengthened when it is successful in delivering the result (alcohol in our case) a trigger is reduced in importance when it does not yield the desired return.

Every time we resist a craving, then the power of the next craving induced by that trigger is diminished. This is incredibly important and is worth repeating.

EVERY TIME WE RESIST A CRAVING, THEN THE POWER OF THE NEXT CRAVING INDUCED BY THAT TRIGGER IS DIMINISHED.

This is how we manage to stop drinking. By denying cravings, from many triggers, over an extended period, then our cravings for alcohol diminish to a level that can be easily managed. When we successively deny the craving over an extended period then we crave alcohol no more than, for example, a donut we might see in a baker’s shop window.

At first the challenge is incredible as the cravings run nearly continuously and they are enormously powerful. But each craving resisted is progress, and in time they fade in intensity. Over time the most commonly fired triggers lose their power. However, the infrequently fired triggers still have their full force. This highlights the two periods when we are most likely to relapse:

1. In the early stages of sobriety while the call to drink is nearly continuous, and
2. In the secondary stage of our sobriety when a big craving suddenly pops up seemingly from nowhere.

By far the most important thing about a relapse is what we learn from it… how to improve our performance for next time. This is how we learn. This is how we grow. This is how we succeed. There is no point whatsoever in going straight back to trying to stay sober without learning from the experience of a relapse. If we do so then we are destined to fall at the same hurdle again.

When we first try to stop drinking then we meet the cravings at their most potent, and they are nearly continuous. We fall at this hurdle many times, principally because we don’t bring enough to the fight; we’ve never experienced the full power of cravings like this before, so we’re unprepared for the severity of the challenge. We learn that this is a very stern test indeed, and that it takes all that we have (and more) to get past these first days of cravings. But if we fail repeatedly at this step, then we need to look at the resources we’re bringing to bear on the problem. We can’t do this entirely alone… we are armed with willpower and logic, but our addiction also has the primal power of the cravings. These are impervious to reason, intense, and unrelenting whereas our willpower is finite. We cannot expect to overcome the height of these initial cravings alone, we need an external boost.

There are things we can do to fight off the peak cravings when they come: Delay, Distract, and Deny.
Cravings are cyclical. If we can delay acting on them then their peak will pass and we regain control.
If our mind is fully occupied doing something else then a craving cannot grow. If we lack the means to acquire alcohol, then even if we can’t beat the craving we can still deny acting on them: Don’t have alcohol in the house. Don’t go out without being accountable for where you go and for how long. Don’t carry cash. Don’t sit in bars. Don’t go near places that sell alcohol.

If we continue to fall at this initial stage then perhaps the range of weapons in the armoury needs improving.
– Did you involve your doctor in this effort? Were there services recommended that you didn’t take up? Was there medication to help with the cravings offered? Did you take it up?
– Who do you have on your team? When things get tough… Do you have someone close you can call on? Is there a recovered alcoholic you can talk to? Are you regularly connected to a recovery group of some sort?
– Is it time to consider some formal treatment, a counselor or treatment centre?

In the early days of staying alcohol-free we need to work on the things that will sustain and replenish our resolve; understanding the individual triggers really makes little difference in this phase since simply being awake is sufficient to bring on a craving. But later on the individual triggers can be identified more clearly.

We don’t suddenly change into a person that no longer drinks. While we may have decided that this is the course that we must take the automatic processes in our minds will still insist that we find and consume alcohol. Our sobriety begins as something that is incredibly fragile; it can fracture at any moment, but over time it becomes more resilient and robust. Whereas initially we may have needed to avoid a lot of social contact simply because there would be drinking there, in time we need to move back into the world. This means exposing ourselves to triggers that are still fully powered up. We can’t avoid all triggers for the rest of our lives, indeed we don’t want to. We want the these triggers to become impotent so that we can move freely around the world like everyone else does. This means that we must expose ourselves to these triggers, and overcome them. The great danger here is that our sobriety is not yet robust enough to overcome them, and that is why we fall.

Relapse in this period is very different. In the early stages of going without alcohol the effort was continuous; we had to be constantly vigilant and ready to fend off the cravings as they came. Relapse in this later phase is usually attributed to becoming complacent, but that’s not really what’s happened. We no longer needed to live on high-alert because the constant barrage of cravings had stopped. So we stopped living constantly on edge and in fear of picking up a drink… that challenge mostly disappeared. What happened is that the problem changed. The issue in this second period is the trigger that gets activated that has not yet been de-powered. These come apparently out-of-the-blue and they come with remarkable ferocity. If we relapse in this second stage of sobriety, falling to a sudden or unexpected craving, then we need to inspect the occurrence carefully, and plan to beat it next time.

We need to overcome triggers to de-power them. But we also need to avoid falling to a trigger because our sobriety was not yet robust enough to overcome it. We can plan for many of these occurrences.

If you relapse then have a good look at the circumstance. Can you identify the trigger? Was it a person?, a place? a time of the day/week? Was it an event? If you can identify the trigger then you can pre-arm yourself for the next time it is activated. You can be ready to meet the craving as it comes instead of being ambushed by it. You can prepare to move away from the circumstance if you feel it is starting to overwhelm you.

At the end of the day, all relapse is growth. The good sober time before the relapse is proof that you CAN do this. They are not taken away by drinking again. They are proof to you that the task isn’t impossible… because you’ve already done it before. The relapse into drinking also teaches us two more things; that the problem is still there… we didn’t become cured by stopping drinking, and that there is a known pot-hole in the road that we know about now. Next time we meet it we will know what to do.

Nothing is lost in a relapse, but much is gained. Picking up a drink may set our “sober days” counter back to the start, but not our recovery. Our recovery is progressed by it.